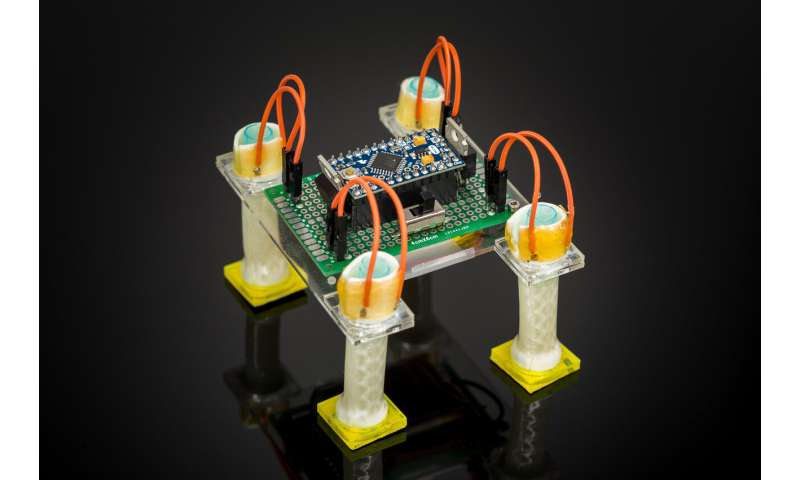 Engineers at the University of California San Diego have developed a way to build soft robots that are compact, portable and multifunctional. The advance was made possible by creating soft, tubular actuators whose movements are electrically controlled, making them easy to integrate with small electronic components.

As a proof of concept, engineers used these new actuators to build a soft, battery-powered robot that can walk untethered on flat surfaces and move objects. They also built a soft gripper that can grasp and pick up small objects.

A problem with most soft actuators is that they come with bulky setups. That’s because their movements are controlled by pumping either air or fluids through chambers inside. So building robots with these types of actuators would require tethering them to pumps, large power sources and other specialized equipment.

The actuators are made from a type of material used for artificial muscles in robots, called liquid crystal elastomers. They are composed of liquid crystal molecules embedded in a stretchy polymer network. What’s special about these materials is they change shape, move and contract in response to stimuli such as heat or electricity — similar to how muscles contract in response to signals from nerve cells.

To construct each actuator, engineers sandwiched three heating wires between two thin films of liquid crystal elastomer. The material is then rolled into a tube, pre-stretched and exposed to UV light.

Each heating wire can be controlled independently to make the tube bend in six different directions. When an electric current is passed through one or two of the wires, it heats up part of the tube and makes it bend in the direction of those wires. When a current is sent through all three wires, the entire tube contracts, shortening in length. When the electricity is turned off, the tube slowly cools down and returns to its original shape.

“Using an externally applied electrical potential makes it easy to program the position of each tubular actuator,” said first author Qiguang He, a mechanical and aerospace engineering Ph.D. student at the UC San Diego Jacobs School of Engineering.

Combining multiple actuators together enabled engineers to build different types of soft robots. They built an untethered, walking robot using four actuators as legs. This robot is powered by a small lithium/polymer battery on board. They also built a soft gripper using three actuators as fingers.

Each robot has an on-board microcontroller in which engineers programmed a sequence of electrically controlled motions for the actuators. This allows the robots to move independently. 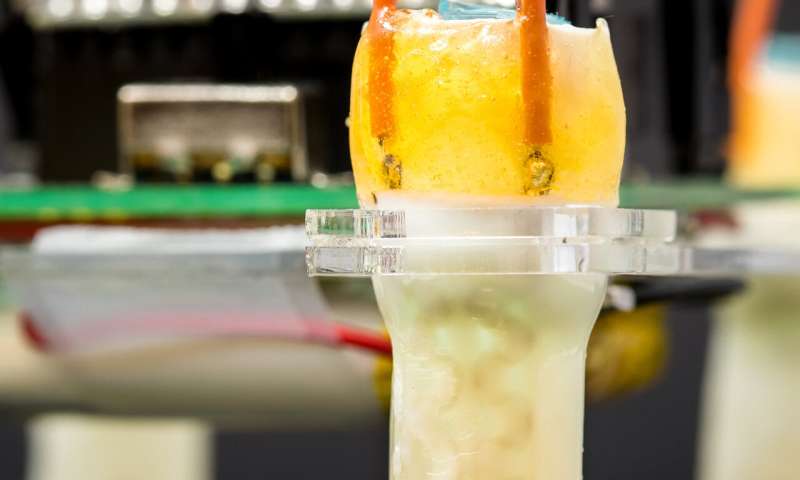 The team is now working on making soft actuators that can move faster. The current actuators take about 30 seconds to fully bend and contract, and up to four minutes to return to their original shapes. That’s because the material takes a bit of time to fully heat up and cool down. The ultimate goal is to make actuators that can contract and relax as quickly as human muscles, He said.